Jankowski produced this work for an exhibition in Kassel, titled Wiedervorlage d5 (Resubmission d5), based on research into the archive of documenta V, curated by Harald Szeemann in 1972. Documenta, one of the most important contemporary art exhibitions in the world, takes place every five years in Kassel, Germany. And Szeemann’s »Interrogation of Reality – Picture Worlds Today« is regarded as one of the most important exhibitions in documenta’s history.
For his contribution to Wiedervorlage d5, Jankowski invited Szeemann to return to Kassel. Back then, Szeemann broke with curatorial convention in that he didn’t select all the works exhibited in detail; instead, he gave artists the opportunity to produce on site and in relation to the specific circumstances.
Jankowski’s film depicts Szeemann and himself walking the streets of Kassel, drinking coffee, passing ducks at a nearby pond, and visiting the Fridericianum museum – normally documenta’s main venue. Though we see the two talking, it’s a silent film, recorded on Super 8 and 16 mm, the material on which Szeemann documented his exhibition, and thus lending it an air of nostalgia. But the film doesn’t want to reconstruct the past; it wants to actualize it. From time to time, intertitles introduce text taken from the concept written by the curators of Wiedervorlage d5, Martin Köttering and Roland Nachtigäller, such as: »How much present lies in the past?« 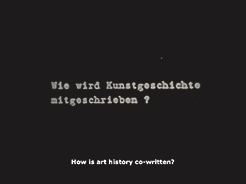