Actor Conor Timmis is convinced that he is the doppelgänger of legendary actor Boris Karloff, the original Frankenstein. For a promo produced by Timmis in order to support his acting career, he built a replica of the original Frankenstein film set. Upon seeing it, Jankowski persuaded Timmis to play chess with him on the replica set. While the chess game makes tacit allusion to Marcel Duchamp, who committed himself to chess from 1928 to 1933 in order to escape art, the black-and-white film deliberately evokes the style of early Frankenstein films – except that the horror fails to appear. Frankenstein beats Jankowski in49 moves. After the unspectacular game, the artist politely congratulates his opponent and exits the scene. 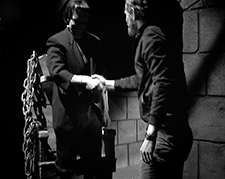